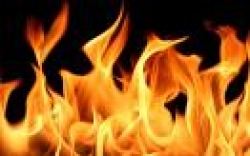 April 16, 2012 (Dehesa) – San Miguel Fire District’s Engine 23 and its three person crew was the first on the scene of a chimney fire in a home on the 1200 block of Avenida Elisa on April 15 at 10:46 p.m. The fire, which began in the chimney box, quickly moved to the attic.  Containing the blaze was problematic because the flames burning in the attic compromised the strength of the roof, according to Leonard Villarreal with the District.  The blaze was knocked down in approximately 30 minutes.