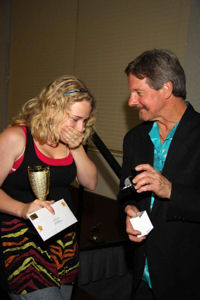 Finalists announced; winner to receive bejeweled award
April 23, 2012 (La Mesa)--Approximately 400 students within the Grossmont Union High School District competed in the fourth annual Golden Artistry Jewelry Design Competition.
This year’s entries were evaluated March 11 by three judges on both the quality of the design and the effectiveness in conveying “flight”, the theme of this year’s competition. Twelve finalists have been selected, but only one will receive the Grand Prize--the design presented to the winner as a piece of jewelry at the awards event on May 3rd at the La Mesa Community Center.  The Grand Prize will be created in precious metals and gems by Master Goldsmith Terry Whyte of Golden Artistry in downtown La Mesa.