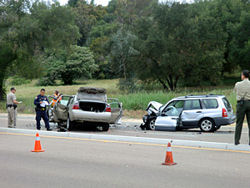 On April 25 shortly after 9 a.m., San Diego Sheriff’s deputies attempted to stop a stolen 2007 Ford Focus with three people inside, but it failed to yield.  A high-speed chase ensued, reaching speeds of 80 mph, the Valley Roadrunner reports.