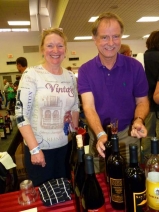 The evening allows guests to sample fare from many local restaurants and food providers, as well as winetasting and craft beers.