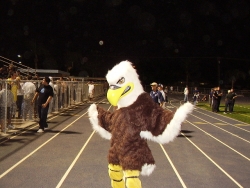 October 2, 2009 (El Cajon)-- After twenty minutes of game time had elapsed, it seemed that Friday night's game between Granite Hills and Central High would be closely contested, with a final score in the 20s. Fortunately for the Granite Hills Eagles, that trend did not continue.

After a slow start by both teams, Granite Hills took control of the momentum and the game to cruise to a 38-13 win over visiting Central High's Spartans of El Centro. Both teams played a scoreless first quarter, and were able to move the ball on some plays, but not consistently enough to be a scoring threat.