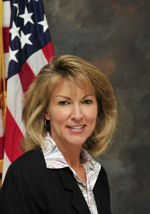 June 9, 2012 (Sa Diego) -- Director Robert S. Mueller, III has named Daphne Hearn special agent in charge (SAC) of the FBI’s San Diego Division. Ms. Hearn most recently served as the SAC of the Administrative Division in Los Angeles.
Ms. Hearn began her career as a special agent with the FBI in December 1991. She first reported to the Buffalo Division, where she worked a variety of programs, including the initiation of an organized crime investigation into a large-scale, international illegal gambling operation with ties to La Cosa Nostra (LCN) families in several cities. In May 1998, she transferred to the Chicago Division, where she worked on the Organized Crime Task Force investigating the LCN’s long-term control over the town of Cicero, Illinois.