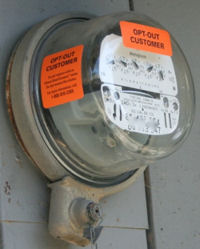 June 15, 2012 (La Mesa)--It has been one month since the opt-out officially began for SDG&E customers. The beginning appeared "rocky", with misinformation and long waits on the phone reported by customers wishing to opt-out. People who decry smart meters are understandably upset with the costs, and this has led to many not wishing to opt-out. Those who don't know why an opt-out might be desirable become very disinterested when they hear of the costs. It is important to know that an email has surfaced (through FOIA submitted by another party) from the CPUC to CA utility contacts that suggested fixing a penalty-type fee for opting out, in order to discourage people from opting out. PG&E reportedly conducted surveys to determine how many might opt-out if there was such a fee, at varying amounts. If free, 40% would opt-out.