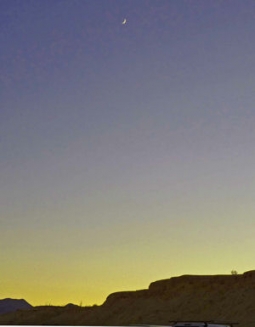 By Miriam Raftery
June 24, 2012 -- A sliver of moon and a spangle of stars shone down on the Ocotillo desert last night, where representatives from eight tribal nations joined in ceremonies to honor their ancestors.  Hundreds of people from across the southwestern U.S. came to mourn the desecration of Native American sacred lands, cremation sites and the natural environment that is now occurring on public land.
As twilight melted into darkness across the shifting sands and jagged ridgelines, the night’s silence was broken only by the whistling of the wind and the cadence of ancient Native American songs unchanged for the past 10,000 years. But that way of life—and the peaceful presence of this place--may soon be gone forever.