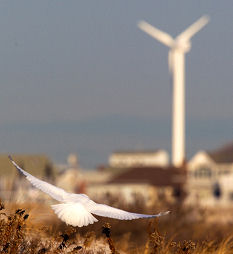 July 1, 2012 (Washington, D.C.)—Federal wildlife agencies are suppressing information about wind energy projects’ negative impacts on America’s wildlife, claims a lawsuit filed by the nonprofit American Bird Conservancy (ABC) June 26 in Washington D.C. District Court.
"It’s ridiculous that Americans have to sue in order to find out what their government is saying to wind companies about our wildlife—a public trust,” said Kelly Fuller, Wind Campaign Coordinator for ABC. “ABC is concerned that many of these projects have the potential to take a devastating toll on songbirds, majestic eagles, and threatened and endangered species,” she added.