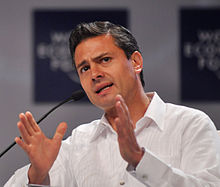 July 2, 2012 (San Diego)-- Enrique Peña Nieto has been declared the winner of  Mexico’s federal election yesterday. Mexico, unlike the United States, has a one-term limit for every office, from Mayor to President. His defeat of the PAN counterpart, Josefina Vazquez Mota, was not unexpected. All polling going into the election had Peña Nieto ahead by five to ten points.