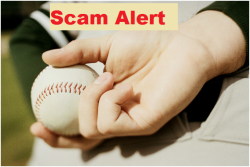 go’s East County)—Seth Tucker, 22, was arrested this morning for a scam in which he allegedly asked Santee residents for donations to send a local high school baseball team to Maui for a championship game.

“Investigators learned that Tucker had been doing this scam for several months in several different neighbors,” said Sgt. Tom Poulin.  “He would always represent himself as a player for the local high school team of the area he was in.”