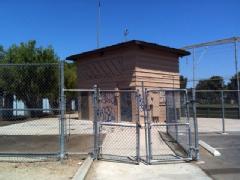 The graffiti was found and reported yesterday morning (Monday) by a park visitor who said he saw four people leaving the park at 4 a.m., when he found the wet paint.  According to the witness, there were two men wearing all-white clothing and two women, one carrying a large duffel bag, ECM news partner 10 News reports.