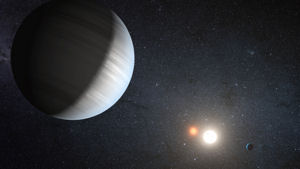 September 6, 2012 (San Diego) -- Astronomers at the International Astronomical Union meeting announced the discovery of the first transiting circumbinary multi-planet system: two planets orbiting around a pair of stars. This discovery shows that planetary systems can form and survive even in the chaotic environment around a binary star. And such planets can exist in the habitable zone of their stars.