The Justice Department has ordered corrective action. Holder emphasized in a press statement, “Let me be clear: the United States Department of Justice reserves all its rights and abilities to force compliance and implement basic change.” 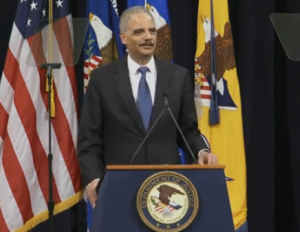 January 17, 2015 (Washington D.C.)--In a speech at a Justice Department ceremony Thursday, U.S. Attorney General Eric Holder honored slain civil rights leader Rev. Martin Luther King, Jr. on what would have been King's 80th birthday.  He praised King as  “a man who helped to lead a really sweeping movement that forever changed the face of America and inspired people around the world to reach for opportunity and to reach for inclusion.”

He hailed the Civil Rights movement’s achievements but noted, “Even today, in 2015, our journey remains incomplete” citing economic and education inequities and recent assaults on the Voting Rights Act.

Holder also praised the “brave men and women of law enforcement,” but added that the nation must improve police officer safety at the same time that it confronts the sense of mistrust between law enforcement officials and the communities they serve.

September 13, 2012 (Washington, D.C.) — Today, Citizens for Responsibility and Ethics in Washington (CREW) named Rep. Darrell Issa (R-San Diego) as a Dishonorable Mention in its Most Corrupt Members of Congress report, an annual, bipartisan look at Washington’s worst. According to CREW, Rep. Issa illegally disclosed information from a sealed wiretap, then hid behind his constitutional protections as a member of Congress to avoid the consequences, earning him a spot in CREW’s latest report.