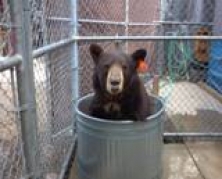 September 15, 2012 (Alpine)—Meatball the bear, originally slated to be temporarily housed at Lions, Tigers & Bears in Alpine, will now be staying permanently at the rescue facility. Owner Bobbi Brink has issued a plea for public help to build a larger enclosure for the bear, which had been wandering into neighborhoods before it was captured and taken to LTB to save it from being killed.