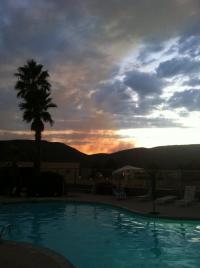 September 24, 2012 (San Diego’s East County) – Cal Fire reports this morning that an estimated 20 homes have been destroyed and another 10 damaged, along with approximately 15 outbuildings.  The fire is now 2,000 acres and 10% contained.

Homes lost are all in the Tierra del Sol area, Mike Mohler of Cal Fire told ECM.  “We’re going to go out right now to compile a list of the addresses,” he said when asked for details on locations of residences that burned.

“Tierra del Sol and Jewel Valley remain evacuated and are still threatened,” Roxanne Provaznik of Cal Fire said in a release issued at 6:50 am.  Highway 94 is closed between the Shockey Truck Trail east to Jewel Valley.