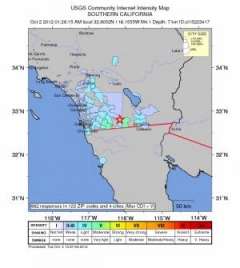 October 2, 2012 (Pine Valley) – An earthquake measuring 4.1 on the Richter scale struck at 1:28 a.m., jolting some East County residents awake.  The quake was centered 22 miles east of Pine Valley and 10 miles northwest of Ocotillo.

“Kind of unnerving,” said videographer Paul Kruze, a Rancho San Diego resident.  The USGS classifies the quake as "moderate" which can include light damage.