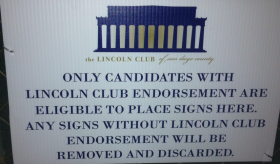 October 4, 2012 (El Cajon)—Three challengers running for office in the El Cajon Council race have made allegations including sign-stealing, racism and pressure on local merchants to back incumbents and suppress messages from other candidates.

On September 25, John Gibson with the Hamann Companies, a backer of  incumbents Bill Wells and Tony Ambrose,  made racially-charged remarks  about Iraqi Chaldean candidate Ben Kalasho in a City Council meeting.  The comments came after the Kalasho campaign accused Gibson, along with an incumbent Councilman, of involvement in removing and defacing Kalasho campaign signs.