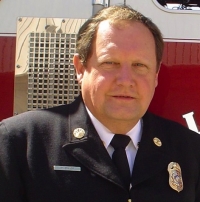 October 8, 2012 (Lakeside) – The Lakeside Fire Protection District contains 55 square miles of land, 65,000 people, and according to its website, http://www.lakesidefire.net, “is primarily suburban residential but also has several core commercial zones, some light industry, and many rural/agricultural properties.” It has a significant wildland/urban interface — firefighter-speak for places where homebuilders have butted developments up against forests and other wild areas. In the last decade, that has proven a recipe for brewing out-of-control fires that have threatened properties and claimed lives—particularly here in Lakeside, which has been devastated by several of the worst wildfires in county history.