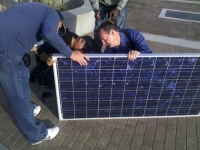 October 11, 2012 (El Cajon) – If Cuyamaca College grant writers were members of a college sports team, they would be basking in the glory of a triple-season winning streak. You’ve heard of the Dream Team? Meet Cuyamaca’s Green Team.

Since June 2009, the crew has had had every one of its 39 grant proposals funded for a total of $7.3 million to train hundreds of students for solid-paying, dependable jobs, including those in up-and-coming green industries. The grants have also funded pilot programs, which have since been expanded and modeled by other colleges.