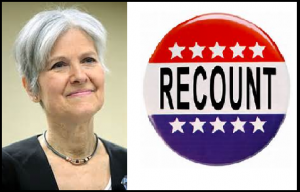 November 24, 2016 (San Diego) – After election security experts urged presidential candidates to seek recounts in Wisconsin, Pennsylvania and Michigan due to anomalies that could indicate hacking by Russia or someone else, Green Party candidate Jill Stein launched a fundraising page for recounts in those three states.  She has raised over $4 million – enough to fully fund a recount in Wisconsin—and is well on the way toward attaining the estimated $6-7 million for recounts in all three states including filing fees, attorney costs and funding recount observers.

The concerns are valid. Here’s why. First,  Russian operatives already have hacked an election—in the Ukraine. The wrong winner was prevented from taking office only because Ukrainian officials discovered the vote-stealing software,  says J. Alex Halderman, professor  of computer science at the University of Michigan whose election technology class regularly tests –and succeeds in hacking into—voting machines used in the U.S. 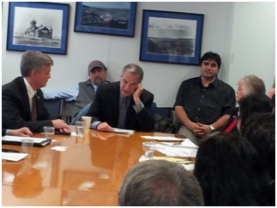 October 16, 2012 (San Diego) – Not a banner day for our beloved democracy when a legitimate candidate for President of the United States is arrested simply for practicing her right to free speech.

Jill Stein and Cheri Honkala, the Green Party presidential and vice-presidential nominees, were just forcibly prevented from entering the grounds of tonight's presidential debate and arrested by local police.