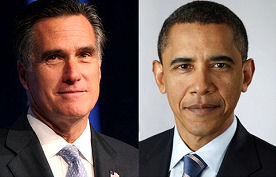 October 29, 2012 (San Diego’s East County) – Major newspapers across the nation are making their endorsements for president.  To date, of the 100 largest newspapers in the U.S., 34 have endorsed President Barack Obama and 28  recommended Mitt Romney to their readers. Though the President leads in total endorsements, Romney has the edge among newspapers in swing states, notably the Des Moines Register in Iowa.