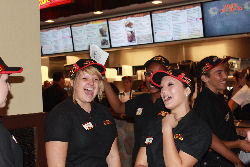 November 3, 2012 (Santee)--Ashley and Jaycee, employees at the newly opened Phil’s BBQ in Santee, get into the mood to serve before the onslaught from “Friends & Family” night to benefit the East County Boys & Girls Club.  The benefit was held before the grand opening and was very well attended.  The restaurant opened up officially on Tuesday, October 30th.