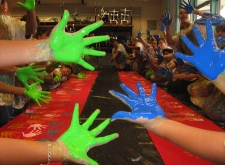 By Lynne Jennings, Board President, San Diego Guild of Puppetry

November 5, 2012 (San Diego)--To our dismay, we discovered last week that our small, hard working, non-profit has been unjustly portrayed for months in Steve Danon's campaign for SD County Board of Supervisors Seat  #3. Although it is clear that he does not feel the arts are worthy of funding(as is his right), he has for some reason made our small arts organization a prime target on his website and in the media. A refrain he has repeated over and over again has been: "No more  $10,000 taxpayer paid funds to the San Diego Guild of Puppetry”. Since we were mentioned specifically in E.A.Barrera's May 23, 2012 article, “Danon Seeks to Shake Up a Stagnant Board of Supervisors” We hope you will help us set the record straight  and let your readers know who we really are, what we actually do, why we were worthy of the one time $10,000 grant we received from the Board of Supervisors in 2004, and why we are worthy of continued funding.