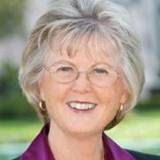 By Bill Weaver
November 17, 2012 (San Diego’s East County) –Supervisor Dianne Jacob has issued a statement urging backcountry residents who oppose the state fire tax fee to take the following steps to protect their rights in the event that litigation ultimately overturns the fees.  While some support the fees as a means to fund firefighting services by Cal Fire during fiscally challenging times for the state, Jacob contends the tax places an unfair burden on rural residents.
"County Supervisor Dianne Jacob advises residents in her district to pay a new state fire tax now being levied on tens of thousands of local homeowners, but to do it under protest.