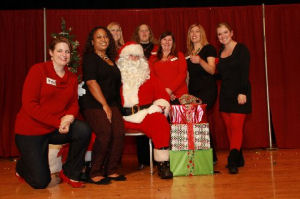 December 18, 2012 (San Diego)--For the 10th consecutive year, the Sycuan Band of the Kumeyaay Nation, owners of the Sycuan Resort & Casino in El Cajon, sponsored the National Multiple Sclerosis Society’s free annual family holiday party for people with MS, as well as their family members and caregivers. The National MS Society in San Diego said more than 600 people attended the 2012 event held on Sunday, Dec. 9 at the San Diego Community Concourse Golden Hall in Downtown San Diego. The holiday party featured a brunch, entertainment and gifts for children delivered by one of Santa’s helpers. Sycuan has sponsored the annual event since 2003.