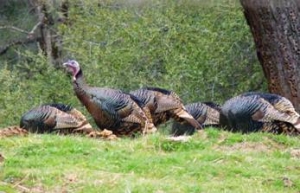 December 2, 2014 (San Diego’s East County)--So you thought there was nothing to know about turkeys except whether you liked drumsticks or white meat. Think again. Here are some fascinating facts provided by the U.S. Department of the Interior. 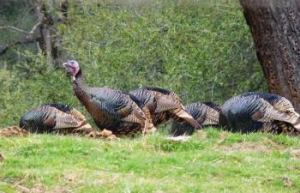 January 4, 2013 (San Diego's East County)--ECM editor Miriam Raftery photographed this healthy-looking flock of wild turkeys near Cuyamaca. There is some debate on whether turkeys are native or non-native in our region.  Thousands of wild turkeys present today in our backcountry are descendants of wild turkeys released in 1993 by hunting groups.  But it's quite possible that turkeys here are in fact a reintroduction ofdescendants from native birds that inhabited southern California eons ago.

Ancient remains of M. Califiornica, a now-extinct species of wild turkeys and a predecessor of modern turkeys, have been found in the La Brea tar pits in Los Angeles County.

Decenber 26, 2012 (Cuyamaca) -- Turkeys for Christmas  may conjure up images of a holiday dinner.  But photographer Tom Lemon spotted this flock on Christmas Day while driving through Rancho Cuyamaca State Park.  He suggests these turkeys should be grateful that they're living in a protected area where hunting is not allowed--or, perhaps, hoping more folks will choose ham for their next holiday feast.