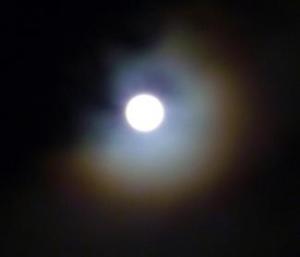 December 29, 2012 (Mount Helix) -- "Ring around the moon, rain is coming soon," according to an old saying. There is truth to the statement, since a halo around the moon is caused by high cirrus clouds and a reflection off millions of ice crystals high up in the atmosphere that creates this irridescent rainbow-like effect.  Moon halos were seen by many people across the eastern U.S. before Hurricane Sandy, for example.