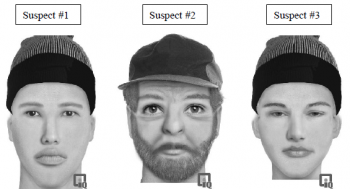 After she was pulled into the truck, the victim reportedly punched the driver and bit another suspect before fleeing to a nearby home for help.

The driver is described as a heavy-set Hispanic man, age 30-40.  A young Hispanic or white male with a thin build, possibly a juvenile, got out of the passenger side and ordered the victim to get in the truck, then pulled her in when she refused.  Another passenger has a thin build and is believed to be Hispanic, age 25-35.