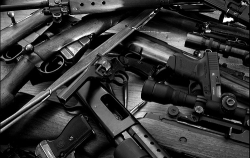 January 17, 2013 (San Diego’s East County) – As ECM reported earlier, President Obama has announced a package of reforms aimed at stemming gun violence in the wake of numerous mass shootings.   Initial media reports were unclear on which actions were done as executive orders by the President for immediate implementation, and which actions require Congressional approval.  So ECM contacted the White House.

“I am providing you with two things that might help your readers understand the President’s announcement yesterday," Brian Lepow with the White House press office responded. “ THIS LINK will take you to the President’s transcript from yesterday.  I have also attached a fact sheet and executive summary on the package of proposals to reduce gun violence and a list of gun violence reduction executive actions.