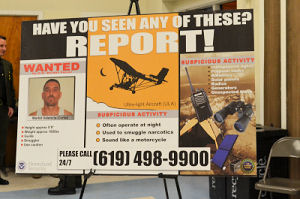 By Nadin Abbott
January 17, 2013 (Alpine) -- The United States Border Patrol came to Alpine to speak with residents about progress made in securing the border and to hear residents’ concerns.  More forums are planned.
Paul Beeson, Chief Patrol Agent in the San Diego Region, said the sector comprises 60 miles of border, from the ocean to El Centro in Imperial County. There are six border patrol stations, which roughly are responsible for 10 miles of border each.