“Our bill is a common-sense way to create jobs and provide renewable energy the same opportunities as oil and gas while increasing our national security.”—Senator Ton Tester (D-Montana), coauthor 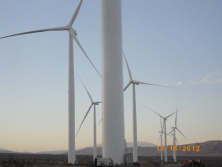 February 12, 2013 (Washington D.C.) – Western legislators in the House and Senate have introduced the Public Lands Renewable Energy Development Act. The measure would establish a leasing pilot project to streamline permitting of renewable projects on public lands. The measure aims to level the playing field between oil and gas companies and renewable energy developers.

It would also assure that funds from energy development on public lands will benefit states and counties, as well as some conservation efforts.

But environmentalists, tribes, and residents who have battled industrial-scale wind and solar projects on public lands have contended that recent fast-tracking of such projects has already gone too far, pushing through projects without adequate scrutiny of serious issues and impacts.