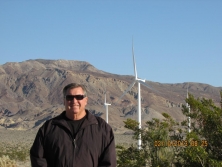 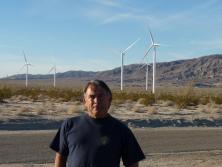 February 13, 2013 (Ocotillo) -- Photographers Jim Pelley and Parke Ewing were interviewed Sunday on the national "Wind Wise" radio program regarding the Ocotillo Express Wind Facility. Russell Graham, construction manager at the Pattern Energy project, was arrested last week for allegedly making violent threats against the photographers and attempting to wrestle a camera away from Ewing.

The freelance photographers' videos and photos have been featured extensively in East County Magazine, documenting environmental destruction and raising serious questions about limited winds at the project. The Sheriff's office has indicated it would request filing of felony charges in the case, which is currently under review by the District Attorney. A restraining order has been issued against Graham, whose violent threat against Ewing was caught on the audio portion of a video recording.