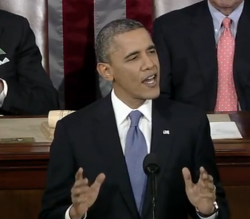 Update February 14, 2013:  Edited to add reactions to President's speech; scroll to bottom for links to local and national reactions and analysis

The President opened by citing progress made during his administration, then announced new goals ranging from raising the minimum wage to putting Americans back to work, from reining in college costs to reducing global warming.