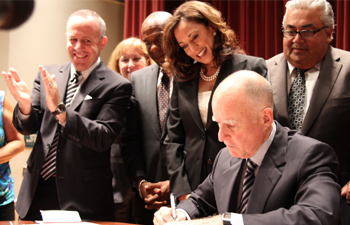 What’s fueling the sudden change?  According to Mortgage Daily News, the state and national shifts are due to California’s new Homeowners Bill of Rights, passed by the Legislature at the request of California Attorney General Kamala Harris (in photo, left, with Governor Jerry Brown).