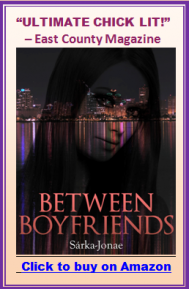 February 18, 2013 (San Diego)--Between Boyfriends hit three Amazon best-seller lists the week after Valentine’s Day, ranking #9 for humor books, #11 for humor e-books and #54 for women's fiction.  Written by San Diego-area resident Sárka Jonae Miller, this book is the ultimate chick-lit read—a light-hearted romp focused on the travails of Jan, a college student dumped by her boyfriend, an SDSU student.  The moment proves an epiphany, as Jan resolves to stop dating and find fulfillment as a single woman.

Raised in pampered privilege, Jan’s problems soon get worse when she loses her parents’ financial support and must learn to be a self-sufficient.

After  two days spent  wallowing in a a self-pitying stupor  following  the breakup with her boyfriend, Jan awakens in her apartment. Appalled upon looking in the mirror, she whacks her hair with manicure scissors. Then she clears out the medicine cabinet of souvenirs from losers she has dated, determined to rid herself of ghosts of boyfriends past.