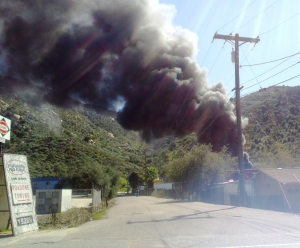 Update: ECM writer Nadin Abbott is at the scene; authorities except this incident to last another 3-4 hours and the fire fully extinguished.

"It is on or near...[a towing facility] 15289 Old Highway 80," Russ Park, who shot the photo at left, told ECM.  The blaze is at least 100 yards off the main road.  Park confirmed an early IPN report, with both indicating the fire originated at a pile of junked cars. IPN reports propane tanks nearby.  Visibility on I-8 is also now affected.