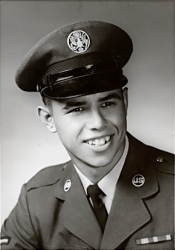 March 1, 2013 (San Diego) -- U.S. Air Force veteran, Ohio native, and California resident George Chappell loved classic cars.  In fact, he owned a ’36 Olds and ’67 Chevy, which he occasionally entered into competition. As a surprise for his 59th birthday in 2006, his wife, Sue, gave him a beautiful, new, last-year-of-production GTO.

George and Sue loved going to classic car shows together—especially Hot August Nights in Reno—in their limited-edition desert orange corvette, another car he occasionally showed. They also shared a love of George’s children, his grandchildren, their three rescued dogs, ‘50s and ‘60s music, and art. George was quite an accomplished artist! He also belonged to a model car club and built models with his sons. His perfectly-crafted models won many awards through the years and were sometimes featured in model car magazines.