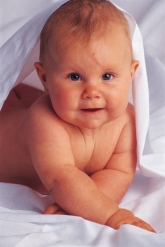 In wake of disaster, children on the west coast of U.S. almost one-third more likely to suffer from thyroid abnormalities; 39% in California

Infants on the West Coast of the United States are showing increased incidents of thyroid abnormalities, which researchers are attributing to radiation released following the March 2011 meltdown at the Fukushima Daiichi nuclear power plant.

According to a new study (.pdf) published in the Open Journal of Pediatrics, children born in Alaska, California, Hawaii, Oregon and Washington between one week and 16 weeks after the meltdown began are an average of 28 percent more likely to suffer from congenital hypothyroidism (CH) than were kids born in those states during the same period one year earlier. In California, the number is a staggering 39 percent.

CH results from a build up of radioactive iodine in our thyroids and can result in stunted growth, lowered intelligence, deafness, and neurological abnormalities—though can be treated if detected early.