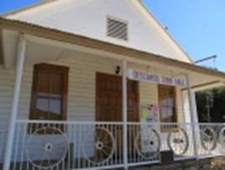 April 18, 2013 (Descanso) – The Descanso Town Hall will be honored on Saturday, April 20 at 10 a.m. and you are invited to join in the festivities.  The historic Town Hall has been selected by E Clampus Vitus, a national primer historical society, to be honored with a monument and plaque.

This historical preservation society, under the leadership of Descanso’s own Warren Geiske, will be unveiling the monument on April 20.

What determines a structure as a historical building includes age, era in which it was built and style. Descanso’s Town Hall was built in 1898, during the time when town halls were being built across the United States.  The purpose for town halls was to build a meeting place where one could get married, have a wake, enjoy a square dance, a pot luck, or even attend church—much the same ways in which Descanso’s town hall continues to be utilized to this day.