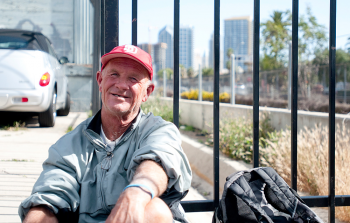 April 22, 2013 (Little Italy, San Diego) – Jerry is homeless. He likes movies and the arts. As a younger man he enjoyed watching the filmmaking students at Long Beach State University as they created their films near his home. As it turns out, he also has a knack for theatre.

Jerry is one of the estimated 10,000 homeless in San Diego County. He is a pleasant man. A San Diego native; intelligent, well-spoken and polite. Nearly 56 years young, he has been on the streets for about seven years now.

When I first heard about Jerry I assumed he might have fallen on hard times and wasn't very happy – that he didn't have control of his situation. I was wrong.