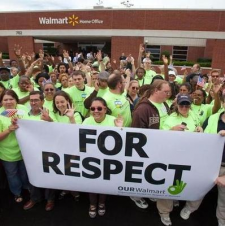 June 2, 2013 (San Diego) – Walmart workers from across the U.S. including some in San Diego County are on strike, seeking more hours to support their families.  They are joining a “Ride for Respect” traveling to a Walmart shareholders meeting in Bentonville, Arkansas on June 7 to deliver their message.

Our Walmart, a workers’ group, is asking the public to sign a petition in support. The petition states that “many workers at Walmart must rely on food stamps and even go hungry because of lack of hours and low wages.” Workers also allege that Walmart has retaliated by firing workers or cutting hours of those who spoke up for their rights. The petition asks Walmart to commit to raise wages and increase access to full-time hours so that workers will earn at least $25,000 a year.