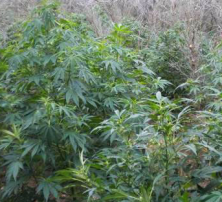 During the search, two women, ages 83 and 61, were detained but not arrested. The house on the property had been burned down during the Cedar fires and had not been rebuilt. The women were living in tents on the property.