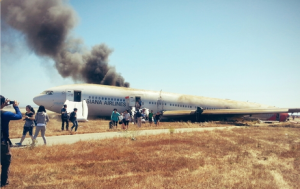 July 6, 2013 (San Francisco) – An  Boeing 777 jetliner from Korea has crashed at the San Francisco airport.  Early indications are the tail of the Asiana flight came apart on landing.  Two fatalities and 30 to 40 serious inuries are reported.  Firefighters on scene swiftly  sprayed fire retardant, preventing a far worse tragedy.

Below are tweets from people at the scene of this breaking news story, including David Eun, a passenger who tweeted the photo at left: