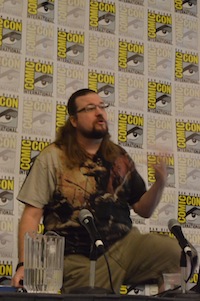 July 23, 2013 (San Diego) – There is more to Comic-Con than Game of Thrones or cool costumes. Yes, there are plenty of incredible costumes. We promise to show you that aspect of the Convention later in the article with the Steam Punk reunion that happened on Saturday. That said, Comic-Con also has a strong educational aspect to it.