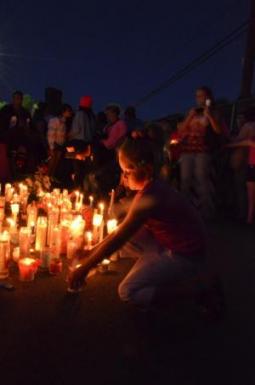 "We are hoping. We're keeping the faith; our little girl is coming home." -- Sara Britt, grandmother

August 6, 2013 (Lakeside) A very emotional gathering of friends, classmates and residents of Hannah and Ethan Anderson met at El Capitan High School tonight in Lakeside  to hold a vigil for the missing children. Those present lit candles and at the end of the ceremony let balloons lose to signify hope.

The children were declared missing and a statewide Amber Alert was issued by the authorities for Hannah, 16, and her 8-year-old brother, Ethan, Monday. On Sunday night, the body of their mother, Christina Anderson, and an unidentified child’s body were found in a burned home in Boulevard.

Authorities have stated that Christina Anderson was murdered. They have not identified the child’s body found. Police believe that one or both children have been abducted by James Lee DiMaggio, a friend of their mother.