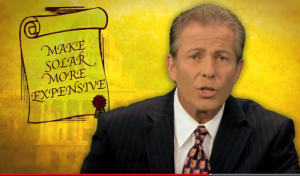 August 19, 2013 (Los Angeles) –  In response to a letter written by Southern California Edison demanding that a parody video posted on the website www.SaveRooftopSolar.com be removed from YouTube, leaders of Presente.org have refused to remove the video. Instead, they vowed to continue their efforts of exposing Southern California Edison and other energy companies that have lobbied against solar panel initiatives throughout California.

These utility companies have targeted Latino legislators throughout the state in an attempt to abolish solar panel initiatives and to stop working class families from gaining access to this a major form of sustainable energy, the group said. The video titled "Edison hates rooftop solar" released by Presente.org and the Other98.com , satirizes Southern California Edison and the other companies who have taken part in these efforts.