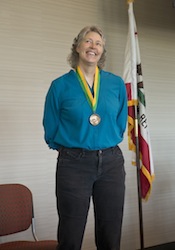 August 29, 2013 (El Cajon) –  Dr. Chris Hill, geology professor and former president of the Academic Senate who filled in last college year as acting Vice President for Academic Affairs, was honored as Grossmont College's Distinguished Faculty Member of the year at an academic convocation held on the campus Monday, August 12.

In announcing the award, Sue Gonda, current president of the Academic Senate, said that Hill had created a course studying natural disasters, and had re-instituted courses on California geology and California natural parks. Additionally, Gonda noted, Hill had written numerous articles, papers and abstracts in the field of geology, including those studying landslide movements in California and geologic processes in the Sierra Nevada.

August 29, 2013 (El Cajon) – The presidents of sister colleges in the Grossmont-Cuyamaca Community College District will be among the performers in a pair of staged readings of the poetry of Edgar Allan Poe at 7:30 p.m. Friday, September 6, and Saturday, September 7, in Room 220 of Building 26 on the Grossmont College campus.

Presidents Mark Zacovic of Cuyamaca College and Sunita V. Cooke of Grossmont College will read some Poe poems that have held them in their thrall since their childhoods.