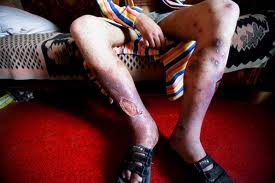 September 26, 2013 (San Diego’s East County) – Arizona officials are reporting the first two cases in the United States of addicts using Krokodil, a drug that rots the skin from the inside out  after first turning skin green and scaly.  It can cause gangrene and amputation of limbs.  A Time investigation of the drug overseas found the average user is dead within 2 or 3 years after first injecting the deadly mixture.

Krokodil , or Desomorphone, is an opiate. It is cheaper and far more potent than heroin.  It’s been called the world’s most horrifying drug, also known as the zombie apocalypse drug. Illicit drug dealers make it by combining codeine with iodine, gasoline, paint thinner, hydrochloric acid, lighter fluid and red phosphorous which addicts inject.  The drug ruptures blood vessels, causing  flesh to rot and even exposing bone.