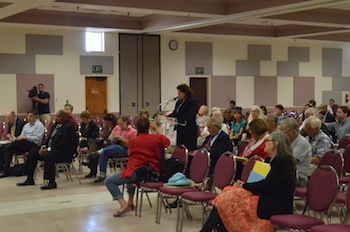 October 2, 2012 (San Diego) — The California Public Utilities Commission (CPUC) held two meetings on October 2 at the Bahr Shrine Auditorium in Kearny Mesa. The first session had about 50 members of the public attending, ratepayers who came from all over Southern California, including San Diego’s East County.

The common theme from residents, expressed well by Carol Jahnkow from Encinitas, was, “Why should rate payers pay for Southern California Edison (SCE) and San Diego Gas and Electric’s (SDG&E) mistakes?”